Awakening ( Oculus Go Game)
This project was cancelled during its development but I was involved in everything from concept art, story, 3D Art, 2D Art, technical art, particles, shaders and animations. 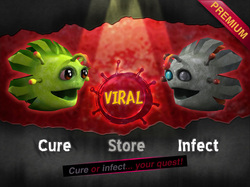 Viral Game (2014)
Viral is a game based on a couple of viruses that came from the outer space and gives the user the option to play as the "good virus" who has to cure all the infected beings or the "bad virus" who has to infect all the beings he can before he dies. This game was cancelled during its development.
Click over the Image to see more info.
Ben 10 Video game
I worked on this project when I  worked in Blokwise company, now its called BW. I worked on the characters, environment, unity3d Integration, shaders and animations. The scripting, UI, effects and publishing was done by the company.
Car simulator
This Project was developed for a company called Quatio Entertainment. Everything in this video was modeled, textured, baked and integrated by me.